St Thomas’s is one of London’s great medieval hospitals, and evolved out of the hospital of the Priory of St Mary Overie, now Southwark Cathedral. In 1215 a new hospital was established as separate from St Mary with the Prior and canons of  St Mary, and it continued to be a religious foundation until the reign of Henry VIII when it was closed in 1540 during the dissolution of the monasteries. It was reopened in the reign of Edward VI  in 1552 on the same site in Southwark and remains a working London hospital today, though it moved from it’s original Southwark site to Lambeth in the 1860s.

In the very late 17th century, during a period of growth and renovation, St Thomas’s Hospital’s governors made the decision to demolish the old church of St Thomas, due to it being in a poor state and suffering some subsidence, and to build a new church on the same site. The Old Operating Theatre Museum is situated in the roof spaces of that new church, which was built between 1700 and 1703. Extensive references to the monthly process of the rebuild, including details of the fate of the materials from the old church, the fittings for the new interior and the debates about the timber to be used in the roof, can be found in the minutes of the court of Governors and shorter summaries of the process in Benjamin Golding’s Historical Account of St Thomas’s Hospital (1819). The build was directed by master mason and governor Thomas Cartwright.

The church was a parish church, with a very small local parish, but it was also part of the complex of the hospital,  and it seems probable that from the time of it’s completion in around 1703, the apothecary of the hospital used the dark dry roof spaces where the museum is now found as a storage garret for the herbs used to make the medicines of the hospital. When the spaces were rediscovered in the late fifties, poppy heads were discovered scattered on the floor. Preserved with varnish in the 50s, some of these are still on display in the museum today. 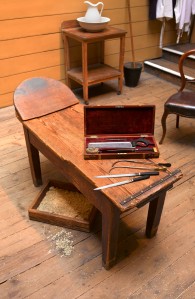 In the early 1820s, half of the roof space over the church was converted into a new operating theatre for the use of the surgeons and their medical students. In the previous arrangement, operations on female patients had been taking part in a space at the end of the adjoining ward block. This situation was not suitable for the other patients, nor was it adequate to contain the growing audience made up of the medical pupils of the United Borough Hospital schools of Guy’s and St Thomas’s. The space created in the roof of the church provided the room to accommodate the audience and to perform the operations in, and the light the surgeons needed, from the large skylight in the roof.

Capital surgery was carried out in theatre for roughly 40 years, between 1821 and 1862. The space witnessed the advent of anaesthesia in the 1840s but not the development of antiseptic surgery.

St Thomas’s Hospital left it’s ancient home in Southwark in 1862 and began the move to it’s current home on the banks of the Thames in Lambeth. The theatre lay undisturbed for around 100 years before it was rediscovered in the late 1950s by the distinguished heart surgeon Lord Brock, and a period of restoration was undertaken. The museum, with a basic collection and it’s first simple displays, opened to visitors in 1962.

Today, the Old Operating Theatre Museum and Herb Garret, accessed from a spiral staircase in the bell tower of St Thomas’s Church, has 40,000 visitors a year. Today, the growing displays feature a large selection of surgical instruments, herbs, pill making equipment and pharmaceutical glass and pathology specimens and the museum has a lively events and education programme. The museum is devoted to telling the story of St Thomas’s Hospital, the church and the medical use of the roof spaces, and the development of materia medica and pharmacy, anatomy and surgery, and medical education over the 160 year period in which the spaces were in use by St Thomas’s.